A few years ago, when I was visiting my (very) old friend Charlie up in Washington, he gave me what has become a treasured possession.

It looks like a normal, old, wooden ruler. A foot long with inches on one side and centimeters (going the other direction, of course) on the other.

But feast your eyes on it. If you don’t see the problem immediately, that’s normal. Just relax. Take your time. And wonder: how did this happen?

Please don’t give it away in the comments. Be sly 🙂

Last month, in Falmouth High School in Maine, some Honors Physics students were estimating the period of a mass hanging from a spring. They used InquirySpace/Data Games software and Vernier motion sensors, and got data that looks like this (Reading is in meters; Time in seconds):

To do their investigations, they needed the period of this wave.

But this post is about an alternative to all of these techniques—one that uses all the data and gives a much more precise result than the first two.

You can read about this is excruciating detail in a paper I wrote. And I made one particularly careful group of students this (awkward and quickly-made) video describing the technique. So I will be brief here. END_OF_DOCUMENT_TOKEN_TO_BE_REPLACED

Dan Meyer read yesterday’s post!! And commented!! Thoughtful as always, it deserves a post of its own—not just a reply—in reply.

The first question in a lot of the activities is “Predict what the relationship will look like.” What advantages and disadvantages does that question have over a question like, “Predict how tall a stack of 500 cups will be,” or another question that requires the relationship but which involves a more concrete objective.

Dan makes a good point. That sort of task promotes using the function. I think it’s especially powerful when it’s late in a sequence of questions. A prototype might be the handshake problem, where early questions help the kids understand what we’re asking with small numbers. The small-number, intuitive, draw-able, act-out-able cases help students get the notion of a sequence and start to organize their data. Then, as he points out, the question about a large number makes using symbols practical and desirable. Furthermore, the concrete example presumably helps bridge that abstraction gap.

In this case, a good question of that sort might be, How many triangles do you have to make before the “spokes” are one meter long? That would be a good addition, but I’m not sure that the beginning is the right place to add it.

Let me explain: In this book manuscript, that opening question,

How will [the sequence number and the side lengths] be related?
Predict: What do you think the relationships will look like?

asks the kids to make a prediction before they measure anything. I think it makes a difference because it’s about data, and because the relationships are not intuitive.

This prediction business is tricky. I don’t pretend to know exactly what I’m talking about, but it’s informed by what I’ve learned using Sonatas for Data and Brain, and from some wonderful work in physics education by Eugenia Etkina and her colleagues.

END_OF_DOCUMENT_TOKEN_TO_BE_REPLACED

At a recent meeting, I got to tell people about an old, non-finished book, EGADs (Enriching Geometry and Algebra through Data). The idea of the book is that there are geometrical constructions that have relationships under them—usually a relationship about length—that you can model using a symbolic formula.

Like that spiral. How does the length of the “spokes” of this spiral depend on the spoke number?

The draft of the book (link above) is free for now, but it occurred to me that you could do at least one activity (integrates trig, geometry, data, exponential functions) easily using Desmos’s cool new technology. Read on!

Here’s what you do:

Here is a graph of mine from Desmos, with only a little of the data: 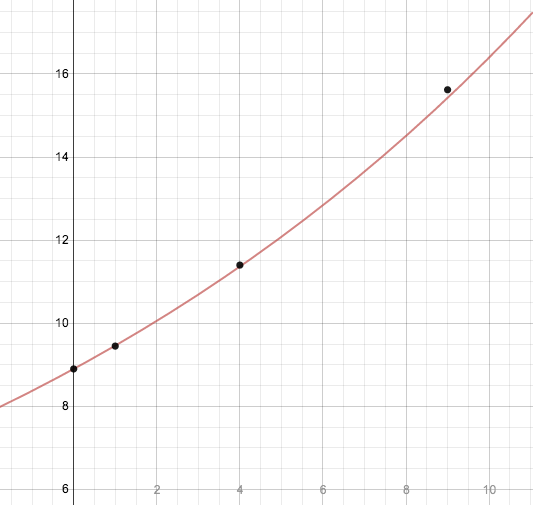 Dan Meyer’s post today is lovely as usual, and mentions the tree/shadow problem (we math teachers make right triangles to help us figure things out because the “tree-ness and shadow-ness don’t matter”).

And that reminded me of a problem I gave teachers long ago in SEQUALS-land that (a) worked really well to get at what I was after and (b) could turn into a great modeling activity that could fit in to that first-year course my fellow revolutionaries and I are gradually getting serious about.

Here’s the idea: we want to be able to predict the length of the shadow of a pile of blocks. So we’re going to make piles of blocks and measure the shadows, which will lead us to make a graph, find a function, etc. etc.

The sneaky part is that we’re doing this in a classroom, so to make good shadows we bring in a floor lamp and turn the class lights off.

I will let you noble readers figure out why this messes things up in a really delicious way. Two delicious ways, actually. I’ll give away the second:

Of course we have all done height/shadow problems. But have you tried to measure a shadow lately? You have to make a lot of interesting decisions to measure a shadow; and a shadow from a pile of blocks made from a floor lamp exaggerates the problems, such as where do you measure from—the middle of the stack? The base on the shadow side? Where? And where do you measure to—where the fuzzy part of the shadow begins? Where it ends? And why is it fuzzy anyway?

This is why I love measurement as a strand so much. We always think of it as the weakling among content areas at the secondary level; it doesn’t have the intellectual heft of algebra or functions. But if you look closely (and go beyond the words in the standards) it’s a thing of beauty and (since we’re referencing Dan Meyer) perplexity. I did a chapel talk at Asilomar many Sundays ago in which I said that measurement was invented, inexact, and indirect. I still think that’s true, although as alliterative slogans go it’s hard to remember.

So: try this at home. Use Fathom if you have it. Come up with a function that models the shadow lengths. But don’t just figure it out like a math teacher—get the lamp, stack the blocks, and measure.